Edward Ryon Makuahanai Aikau (Kahului, Hawaii, May 4, 1946 – March 17, 1978) was a Hawaiian lifeguard and surfer. As the first lifeguard at Waimea… 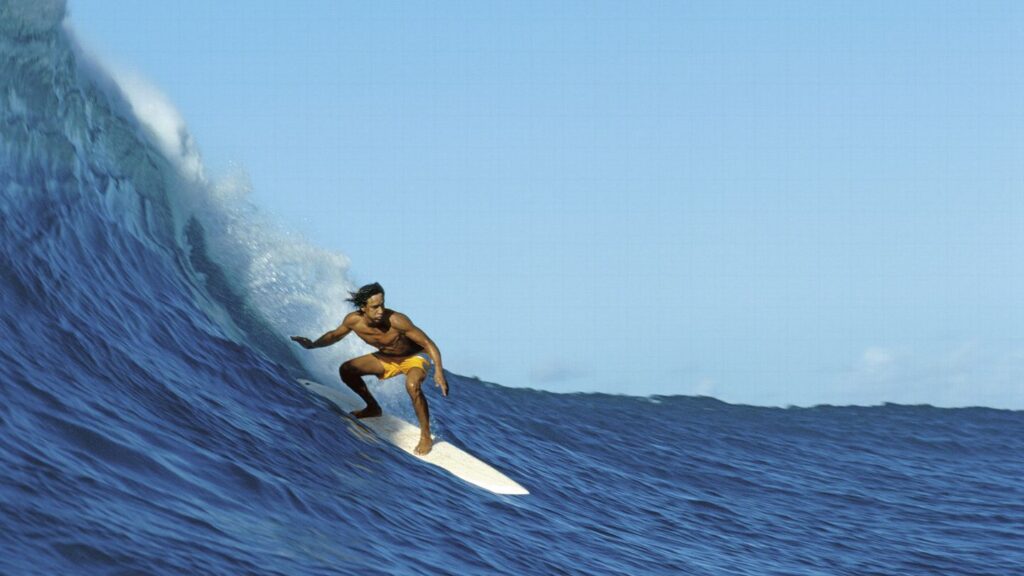 Edward Ryon Makuahanai Aikau (Kahului, Hawaii, May 4, 1946 – March 17, 1978) was a Hawaiian lifeguard and surfer. As the first lifeguard at Waimea Bay on the island of Oahu, he saved over 500 people and became famous for surfing the big Hawaiian surf, winning several awards including the 1977 Duke Kahanamoku Invitational Surfing Championship.

Born in Kahului, Maui, Aikau was the third child of Solomon and Henrietta Aikau. The words Makua Hanai in Eddie Aikau’s full name means feeding parent,[1] an adoptive, nurturing, fostering parent,[2][3] in the Hawaiian language. He was a descendant of Hewahewa, the kahuna nui (high priest) of King Kamehameha I and his successor Kamehameha II.[4] Aikau first learned how to surf at Kahului Harbor on its shorebreak. He moved to Oʻahu with his family in 1959, and at the age of 16 left school and started working at the Dole pineapple cannery; the paycheck allowed Aikau to buy his first surfboard. In 1968, he became the first lifeguard hired by the City & County of Honolulu to work on the North Shore. The City & County of Honolulu gave Aikau the task of covering all of the beaches between Sunset and Haleiwa. Not one life was lost while he served as lifeguard of Waimea Bay, as he braved waves that often reached 30 feet (9.1 m) high or more.[5] In 1971, Aikau was named Lifeguard of the Year.[6] On February 28, 1978, TV producer John Orland was the last person Aikau rescued at Waimea Bay.

In 1978, the Polynesian Voyaging Society was seeking volunteers for a 30-day, 2,500-mile (4,000 km) journey to follow the ancient route of the Polynesian migration between the Hawaiian and Tahitian island chains. Aikau joined the voyage as a crew member. The double-hulled voyaging canoe Hōkūleʻa left the Hawaiian islands on March 16, 1978. It developed a leak in one of its hulls and later capsized about twelve miles (19 km) south of the island of Molokaʻi. In an attempt to get help, Aikau paddled toward Lānaʻi on his surfboard.[7] Although the rest of the crew were later rescued by the U.S. Coast Guard Cutter Cape Corwin, Aikau’s body was never found. He removed his life jacket since it was hindering his paddling of the surfboard. The ensuing search for Aikau was the largest air-sea search in Hawaiian history.[8]

In Aikau’s honor, the surfwear company Quiksilver sponsored “The Eddie” until 2016. The event was cancelled for 2017 but the AiKau has brought it back with largely local sponsors for 2018-19[9]  – the Quiksilver Big Wave Invitational in Memory of Eddie Aikau at Waimea Bay.

Since its inception (the first Eddie was held at Sunset Beach in 1985;[10] in 1987 Eddie Aikau’s younger brother Clyde Aikau won the first Eddie after it moved to Waimea Bay[10][11]), the tournament has only been held nine times, due to a precondition that open-ocean swells reach a minimum of 20 feet (this translates to a wave face height of over 30 feet).[12] The most recent tournament was in February 2016, when waves in the bay reached 30 to 50 feet (15 m) high.[13] The contest invites only 28 big-wave riders to participate in two rounds of competition. The event does not allow the use of jet skis to tow surfers into the waves.

In the 1980s, bumper stickers and T-shirts with the phrase “Eddie Would Go”[14] spread around the Hawaiian Islands and to the rest of the world. According to maritime historian Mac Simpson, “Aikau was a legend on the North Shore, pulling people out of waves that no one else would dare to. That’s where the saying came from – Eddie would go, when no one else would or could. Only Eddie dared.”[8] The phrase originated during the first Eddie contest. The waves were huge and the conditions were extremely dangerous. While the contest organizers were discussing whether to put it on, Mark Foo looked at the conditions and said “Eddie would go.” The phrase stuck and then Eddie went.[2]

Another variation of the aforementioned popular phrase is “Eddie wouldn’t tow.” This phrase is in reference to the method of big wave surfing in which one surfer must accelerate another surfer (the former on a jet ski, the latter towed on a surfboard) to the speed of a large, fast wave. It is also partially in response to the controversy over the “unnaturalness” of tow-in surfing; many surfers feel that being towed in to a wave, as opposed to paddling, is against the spirit of the sport.[15]

Austin, Texas, band Full Service recorded a song about Eddie Aikau called “In A Rescue,” found on their 2006 album “Recess.” They performed the song at the Full Service Circus in May 2013.[16]

Sam George, an ex-professional surfer, directed a 30 for 30 documentary about Aikau called Hawaiian: The Legend of Eddie Aikau. Produced by filmmaker Agi Orsi, the documentary premiered on ESPN on October 1, 2013. The documentary produced for television details Aikau’s life from childhood to his death and won an Emmy for Best Sports Documentary Series, making it one of the few surf-related films to ever receive such recognition.[17]

Eddie’s story was humorously (and respectfully) told by comedian Kurt Braunohler in a second-season episode of Drunk History that was dedicated to Hawaiian history, which aired on August 12, 2014.

Eddie’s story was told by Karen Kilgariff on episode 160 of the podcast My Favorite Murder, which aired February 14, 2019.

The character of Z in the animated movie Surf’s Up is loosely based on Eddie’s life and mysterious death.[citation needed]