Ugadi is the Lunar New Year’s Day for the people of the Telugu and Kannada communities in India. The date of… 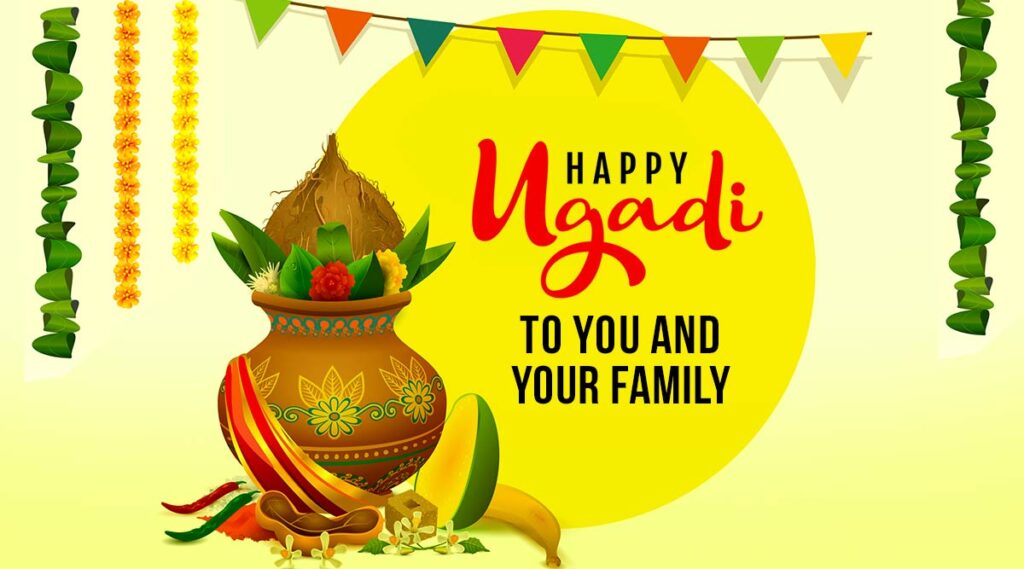 Ugadi is the Lunar New Year’s Day for the people of the Telugu and Kannada communities in India.

The date of Ugadi is based on calculations of the position of the moon dating back to 12th century. Ugadi begins on the first new moon after the Spring Equinox. Ugadi is celebrated the next morning as an Indian day starts from sunrise.

This date usually falls in late March or early April in the western calendar and this date moon signifies a change in the seasons and essentially means Ugadi is a spring festival.

In Maharashtra, it is known as Gudipadawa and may be called Gudi Padava in other parts of India..

The name Yugadi or Ugadi is derived from the Sanskrit words yuga (age) and ādi (starting) – ‘the beginning of a new age’.

The legend behind this festival is that Lord Brahma created the universe on Ugadi.

The nine-day long spring festival of Vasanta Navratri (Chaitra Navratri) begins on this day and concludes on Ram Navami. It is believed that the creator of the Hindu pantheon Lord Brahma started creation on this day – ‘Chaitra Suddha Padhyami’ or the Ugadi day.

The famed Indian Mathematician Bhaskaracharya’s astronomical calculations in the 12th century determined the date of Ugadi from the sunrise on as the beginning of the New Year, a new month and new day.

How is Ugadi celebrated?

Preparations for Ugadi begin a week in advance and include customs common to many spring festivals such as house cleaning and buying new clothes. On the day of Ugadi, a tradition is to get up before dawn for an Abhyang – a head bath an after massaging with sesame oil.

Ugadi heralds the arrival of Spring and warmer weather. As such it is a joyous festival signifying growth and prosperity and as with all New Year festivals, it is a chance to put the errors of the past behind, make predictions and a good time to start new ventures.

A customary food prepared during Ugadi is Bevu Bella, a paste made from jaggery (sugar), neem buds, tamarind juice, and raw mango. The paste combines several sweet and sour tastes. These different tastes are intended to remind anyone tasting the paste that life is a mixture of happy and sad events.