Correction note: This article originally stated that Apple had hiked iPhone prices by 500% in the past eight years; in… 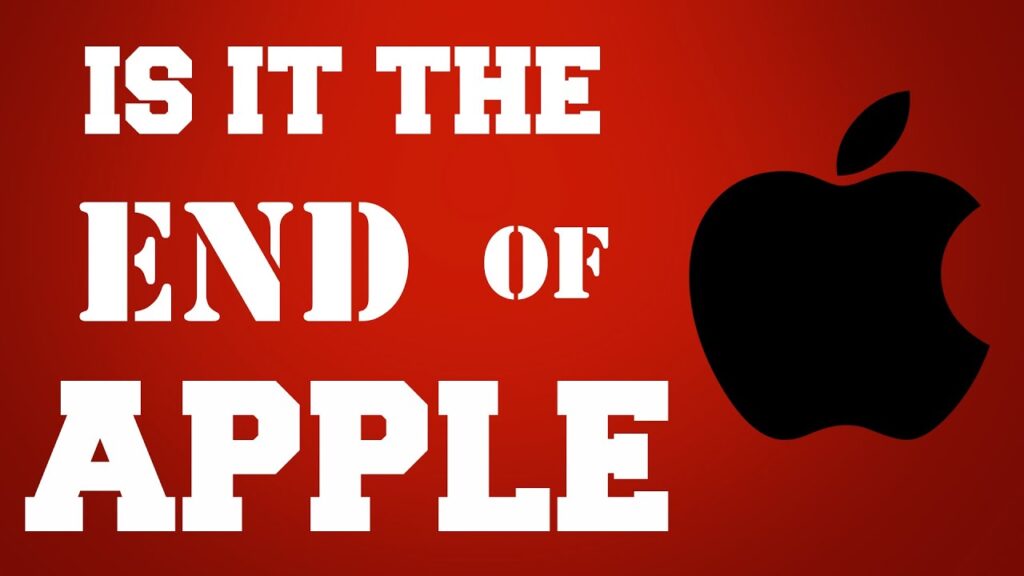 Correction note: This article originally stated that Apple had hiked iPhone prices by 500% in the past eight years; in 2010, you could buy a brand-new iPhone 4 for 199 bucks; in 2014, the newly released iPhone 6 cost 299 bucks; the cheapest model of the latest iPhone X costs $1,149.

Here I am sitting in a cab in New York City.

I’m headed uptown to Columbia University where we’ll hold the first-ever American Disruption Summit. (You can register to watch for free here.)

The driver and I are talking about the absurd price tag of the latest Apple (AAPL) iPhone.

“Who can afford that?” he asks.

Most Popular In: Markets

Apple has had an incredible decade.

Since the iPhone debuted in 2007, the company’s sales have jumped tenfold. The stock has soared over 700%.

And up until last November, it was the world’s largest publicly traded company.

But two weeks ago, Apple issued a rare warning that shocked investors.

For the first time since 2002, the company slashed its earnings forecast. The stock plunged 10% for its worst day in six years.

This capped off a horrible few months in which Apple stock crashed about 35% from its November peak. 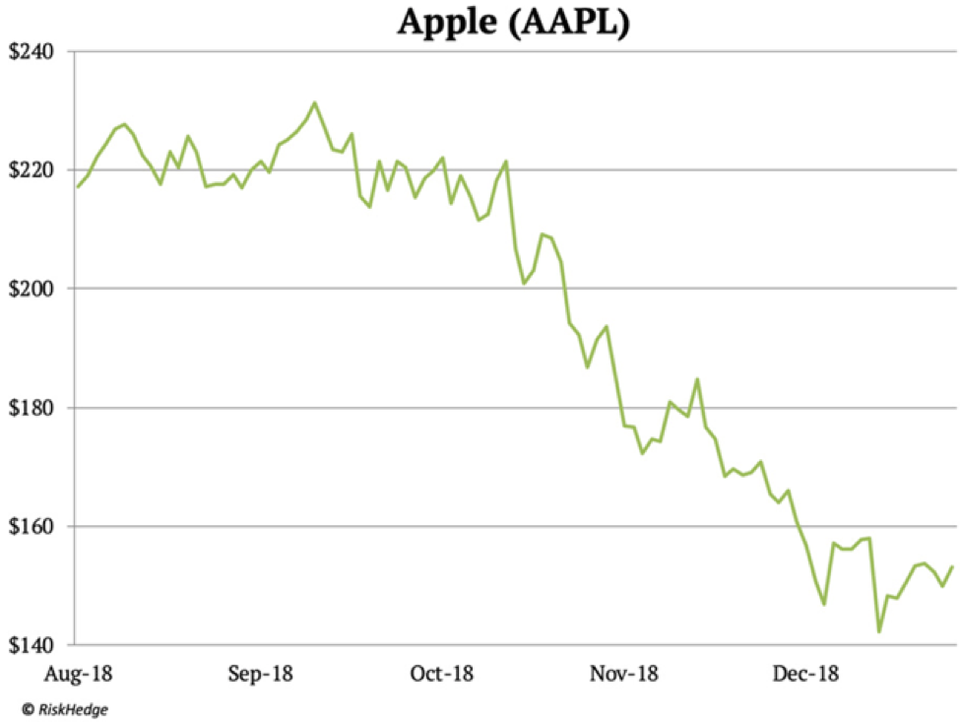 That erased $446 billion in shareholder value—the biggest wipeout of wealth in a single stock ever.

And it’s only the beginning…

If you looked at Apple’s sales numbers, you wouldn’t see anything wrong. 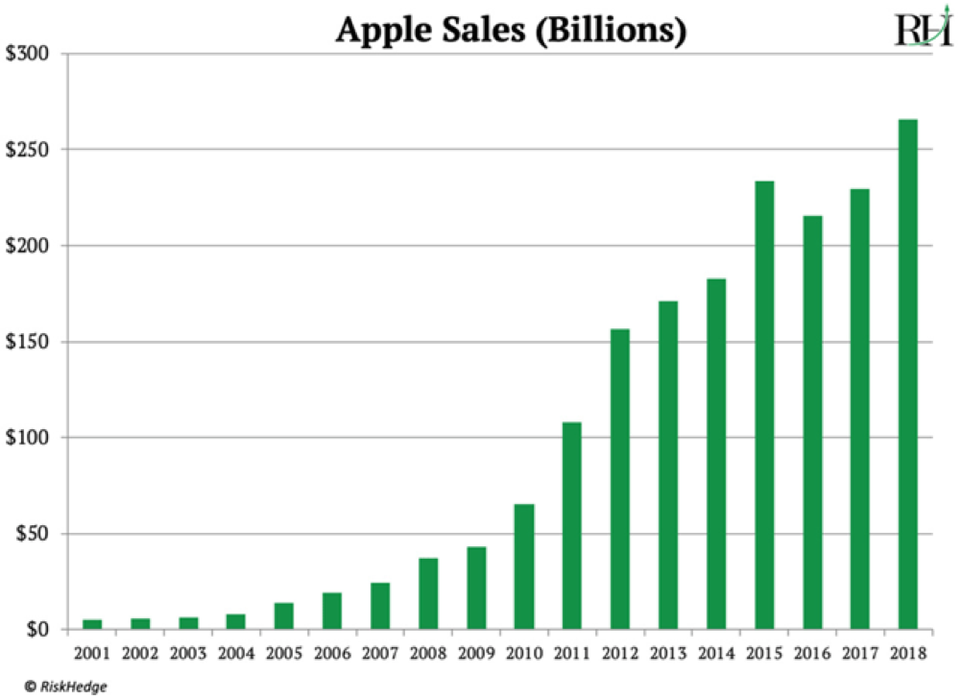 By this measure, Apple’s business seems perfectly healthy. But there’s a secret hidden behind these headline numbers.

Despite the revenue growth, Apple is selling fewer iPhones every year.

In fact, iPhone unit sales peaked way back in 2015. Last year, Apple sold 14 million fewer phones than it did three years ago.

In 2014, the average selling price for iPhone was roughly $600, according to Statista.

When Apple released its latest flagship phone last year, the average iPhone price went up to $800, according to Statista!

But technology always gets cheaper over time.

Not so long ago, a flat-screen high-definition TV was a luxury. Even a small one cost thousands of dollars. Today you can get a 55-inch one from Best Buy for $500.

In 1984, Motorola sold the first cell phone for $4,000. The average price for a smartphone today is $320, according to research firm IDC.

In all, cell phone prices have come down roughly 92%.

Frankly, it’s remarkable that Apple has managed to pull this off.

But let me tell you this…

It comes down to the lifecycle of disruptive businesses.

Apple was the driving force behind this explosion. As the dominant player in a rapidly growing market, it become the most profitable publicly traded company in history.

Then iPhone sales growth stalled in 2015. This would’ve been the end for most businesses.

But Apple did a masterful job of extending its prime through price hikes.

Its prestigious brand and army of die-hard fans allowed it to charge prices that seemed crazy just a few years ago.

But now iPhone price hikes have gone about as far as they can go.

After all, what’s the most you would pay for a smartphone?

How bad is this? It’s so bad that Apple now keeps it a secret.

This is a very important piece of information. Investors deserve to know it. Yet Apple now keeps it secret.

Keep in Mind, the iPhone is Apple’s Crown Jewel

Let that sink in…

A publicly traded company that makes most of its money from selling phones is no longer telling investors how many phones it sells!

And its other business lines can’t pick up the slack for falling iPhone sales.

Twenty percent of Apple’s revenue comes from iPads and computers. Those segments are also stagnant.

Which means 86% of Apple’s business is going nowhere.

Could Apple go the other way and slash iPhone prices?

I ran the numbers.

If Apple cut prices back to 2016 levels, it would have to sell 41 million additional phones just to match 2018’s revenue.

Before Apple, Nokia (NOK) was king of cell phones.

In 2007 the front-cover headline of a major business magazine read:

“Nokia: One billion customers—can anyone catch the cell phone king?”

The iPhone debuted in 2007. Here’s Nokia’s stock chart since then: 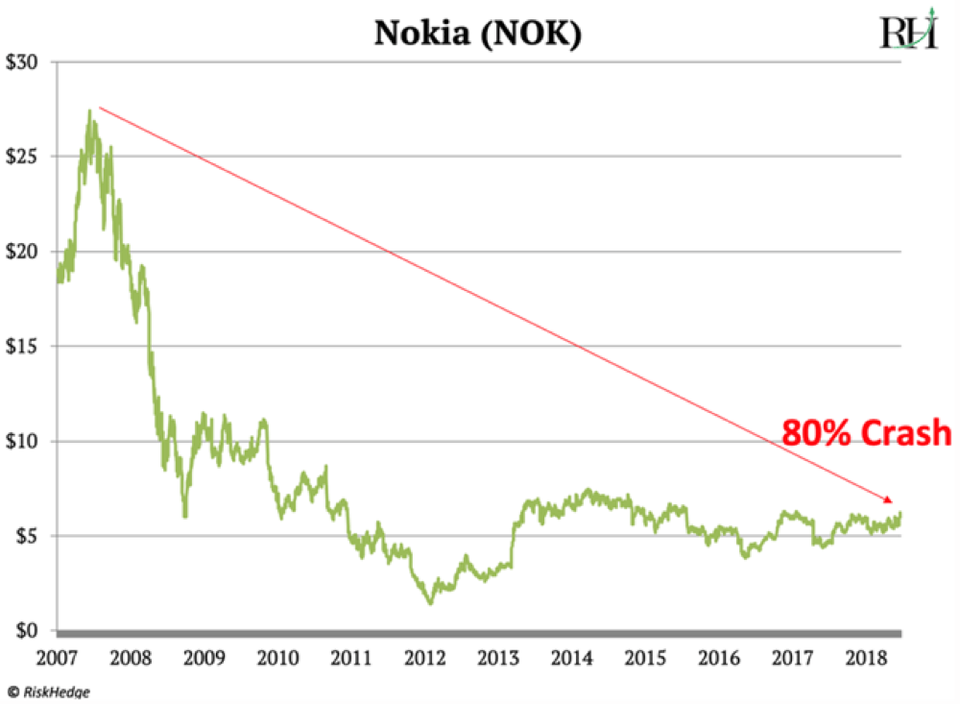 This under-the-radar stock could be like buying Apple in 2001. Unlike Apple, which needs new avenues of growth to keep its stock price from plummeting, this undervalued stock is poised to profit from the coming explosive growth in the marijuana industry. Find out the name of the stock here.

Linkedin
Categories: General Tags: apple error 2001, apple graph, apple is shit, apple maps jobs, arts and apples 2015, average cost of apples, bad apple 2015, best cell phone case brands 2015, downfall ending, end of apple has begun, end of year sales 2015, fall hat trends 2015, forbes end of apple, forbes the end of apple, gone downhill, how long does an apple last, how to make a piece out of an apple, i am a apple, in another world with my smartphone ende, iphone mania, iphone mania stock, iphone tsunami stock to buy, iphones for less, is apple in trouble, is ive, numbers on apples, popular brands that have gone down the drain, prices right models 2015, red headed lady reaching for an apple, riskhedge report, selling apples, steve jobs right hand man, the end has begun, the end is begun, the end of apple has begun, three the end is begun, wipeout ios