Chronic obstructive pulmonary disease (COPD) is a group of progressive lung diseases that make it difficult to breathe. COPD can include emphysema and chronic… 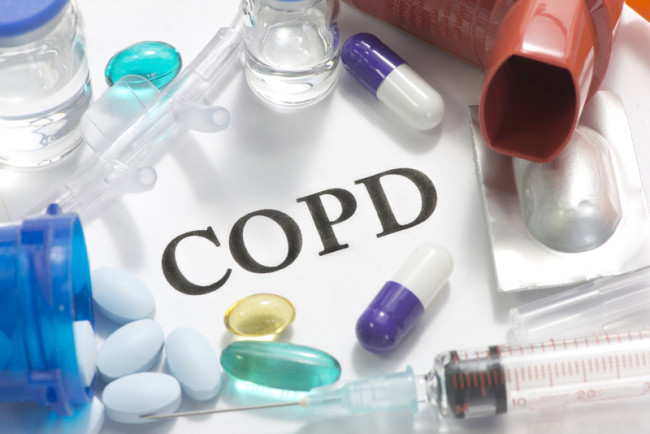 Chronic obstructive pulmonary disease (COPD) is a group of progressive lung diseases that make it difficult to breathe. COPD can include emphysema and chronic bronchitis.

If you have COPD, you may have symptoms such as trouble breathing, cough, wheezing, and tightness in your chest. COPD is often caused by smoking, but in some cases it’s caused by breathing in toxins from the environment.

There is no cure for COPD, and the damage to the lungs and airways is permanent. However, several medications can help reduce inflammation and open your airways to help you breathe easier with COPD.

Bronchodilators help open your airways to make breathing easier. Your doctor may prescribe short-acting bronchodilators for an emergency situation or for quick relief as needed. You take them using an inhaler or nebulizer.

Examples of short-acting bronchodilators include:

Short-acting bronchodilators can cause side effects such as dry mouth, headache, and cough. These effects should go away over time. Other side effects include tremors (shaking), nervousness, and a fast heartbeat.

If you have a heart condition, tell your doctor before taking a short-acting bronchodilator.

With COPD, your airways can be inflamed, causing them to become swollen and irritated. Inflammation makes it harder to breathe. Corticosteroids are a type of medication that reduces inflammation in the body, making air flow easier in the lungs.

Several types of corticosteroids are available. Some are inhalable and should be used every day as directed. They’re usually prescribed in combination with a long-acting COPD drug.

Other corticosteroids are injected or taken by mouth. These forms are used on a short-term basis when your COPD suddenly gets worse.

The corticosteroids doctors most often prescribe for COPD are:

For some people with severe COPD, the typical first-line treatments, such as fast-acting bronchodilators and corticosteroids, don’t seem to help when used on their own.

When this happens, some doctors prescribe a drug called theophylline along with a bronchodilator. Theophylline works as an anti-inflammatory drug and relaxes the muscles in the airways. It comes as a pill or liquid you take daily.

Side effects of theophylline can include nausea or vomiting, tremors, headache, and trouble sleeping.

Long-acting bronchodilators are medications that are used to treat COPD over a longer period of time. They’re usually taken once or twice daily using inhalers or nebulizers.

Because these drugs work gradually to help ease breathing, they don’t act as quickly as rescue medication. They’re not meant to be used in an emergency situation.

The long-acting bronchodilators available today are:

Side effects of long-acting bronchodilators can include:

More serious side effects include blurry vision, rapid or irregular heart rate, and an allergic reaction with rash or swelling.

Triple therapy, a combination of an inhaled corticosteroid and two long-acting bronchodilators, may be used for severe COPD and flare-ups.

Combinations of two long-acting bronchodilators include:

Combinations of an inhaled corticosteroid and a long-acting bronchodilator include:

However, it also indicated that pneumonia was more likely with triple therapy than with a combination of two medications.

Roflumilast (Daliresp) is a type of drug called a phosphodiesterase-4 inhibitor. It comes as a pill you take once per day.

Roflumilast helps relieve inflammation, which can improve air flow to your lungs. Your doctor will likely prescribe this drug along with a long-acting bronchodilator.

Side effects of roflumilast can include:

Let your doctor know if you have liver problems or depression before taking this medication.

COPD flare-ups can cause increased levels of mucus in the lungs. Mucoactive drugs help reduce mucus or thin it so you can more easily cough it up. They typically come in pill form, and include:

A 2019 studyTrusted Source suggested that these medications may help reduce flare-ups and disability from COPD. A 2017 study also found that erdosteine lowered the number and severity of COPD flare-ups.

Side effects of these medications may include:

It’s important for people with COPD to get a yearly flu vaccine. Your doctor may recommend that you get the pneumococcal vaccine as well.

These vaccines reduce your risk of getting sick and can help you avoid infections and other complications related to COPD.

A 2018 research review found that the flu vaccine may also reduce COPD flare-ups, but noted that there were few current studies.

Get Answers from a Doctor in Minutes, Anytime

Have medical questions? Connect with a board-certified, experienced doctor online or by phone. Pediatricians and other specialists available 24/7.

Regular treatment with antibiotics like azithromycin and erythromycin may help manage COPD.

A 2018 research review indicated that consistent antibiotic treatment reduced COPD flare-ups. However, the study noted that repeated antibiotic use can cause antibiotic resistance. It also found that azithromycin was associated with hearing loss as a side effect.

More studies are needed to determine the long-term effects of regular antibiotic use.

A 2019 study found that the drug tyrphostin AG825 lowered inflammation levels in zebrafish. The medication also sped up the rate of death of neutrophils, which are cells that promote inflammation, in mice with inflamed lungs similar to COPD.

Research is still limited on using tyrphostin AG825 and similar drugs for COPD and other inflammatory conditions. Eventually, they may become a treatment option for COPD.

In some people, inflammation from COPD may be a result of eosinophilia, or having a higher-than-normal amount of white blood cells called eosinophils.

A 2019 studyTrusted Source indicated that biologic drugs may be able to treat this form of COPD. Biologic drugs are created from living cells. Several of these drugs are used for severe asthma caused by eosinophilia, including:

More research is needed on treating COPD with these biologic drugs.

Talk with your doctor

Different types of medications treat different aspects and symptoms of COPD. Your doctor will prescribe medications that will best treat your particular condition.

Questions you might ask your doctor about your treatment plan include:

Linkedin
Categories: Health Tags: albuterol nursing implications, alvesco vs qvar, anticholinergic inhalers, atrovent side effects, broncodilatador, bullectomy, can asthma turn into copd, can copd be reversed, cbd and copd, clear chronic, copd assessment test, copd chest x ray, copd mayo clinic, copd medications, copd nursing diagnosis, copd x ray, copd xray, daliresp side effects, do inhalers damage lungs, does drinking alcohol make copd worse, does nac make you sleepy, does trelegy cause weight gain, how do you stop copd from progressing, how does daliresp help copd, how much oxygen should be given to a patient with copd, hyperinflated lungs, hyperinflation of lungs, inhaler chart, is atrovent inhaler a steroid, is copd reversible, mild copd, nac for copd, nursing diagnosis for copd, opcd, otc bronchodilator, oxygen pills, prednisone for copd, rescue inhaler for copd, respiratory medications, stiolto respimat side effects, types of inhalers, what are 3 physical assessment findings signs that are associated with copd, what are the side effects of daliresp, what do chronic obstructive pulmonary disease patients die from& amultiple cause coding analysis, what happens if you use oxygen and don't need it, what happens if you use oxygen when you don't need it, which is better for copd advair or spiriva, which statement is true about both lung transplant and bullectomy?, why do copd patients feel full fast, why is oxygen bad for copd